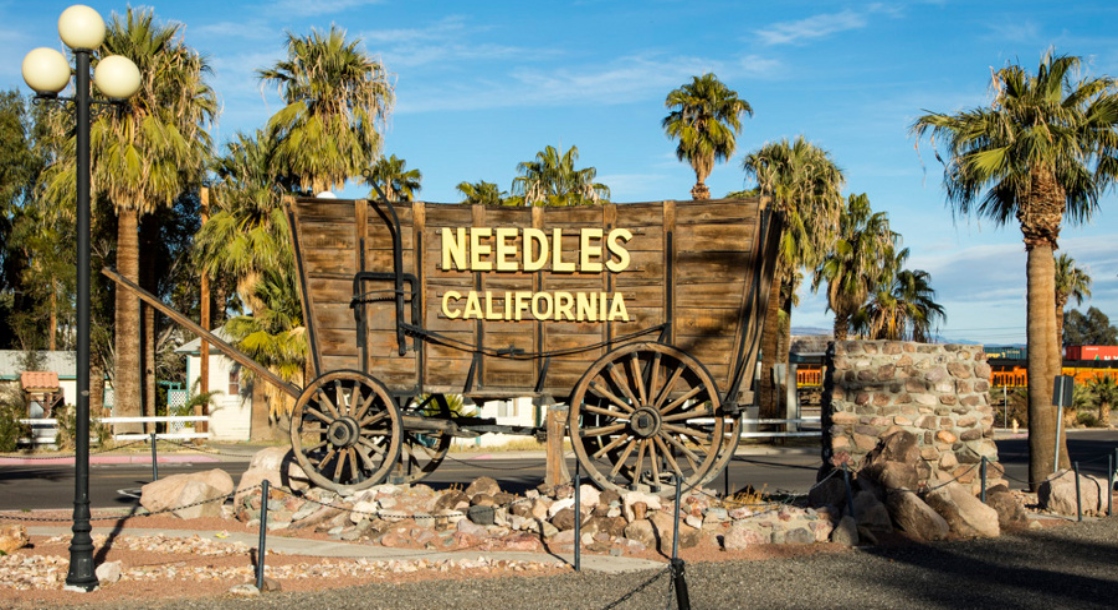 Needles, California wants to exempt itself from the state’s strict gun laws so it can entice neighbors in Arizona and Nevada to do business there — and buy its weed.

In recent years, a rural, Trump-supporting California community almost became a ghost town overrun by tumble weeds. But after embracing the other, less-tumbly weed, it experienced an economic revival. Now, this same town wants to exempt itself from the Golden State’s strict gun control laws to encourage out-of-state business from Nevada and Arizona.

As reported by the East Bay Times, Needles wants to become a “Second Amendment sanctuary,” a safe space for gun owners where residents and visitors can ignore California’s “900-plus gun laws.” Members of the town’s council believe that by making Needles more friendly to out-of-state gun lovers, they may entice more pot customers, too.

Not every resident in Needles thinks the plan is a good idea, or that it’ll even work. Ruth Musser-Lopez, who has lived in the town since 1980, described the council’s use of the term “sanctuary” as “mocking and disrespectful.”

“The council needs to get real,” she wrote in an e-mail to the East Bay Times. “Number one, no one from Arizona is going to ‘shop’ in Needles. First off, cannabis consumers can’t legally carry the pot they purchase here over the border into Arizona. Number two, we don’t even have a grocery store or indoor mall; it’s too hot to shop here and our gas is typically $2 higher than in Arizona.”

Needles sits right along the California-Arizona-Nevada tri-point, with its eastern border defined by the Colorado River that divides California from Arizona. When California legalized adult-use marijuana in 2016, the town became one of the first to sign up for weed licenses. To date, Needles has over 80 licensed operators, who flocked to the once-struggling railroad town because of its low electricity and water costs, which are some of the heaviest costs when cultivating cannabis on a commercial scale.

The town hosts a tiny population of just 5,000 people. According to the New York Times, its council estimated that the weed industry would bring an additional 2,100 jobs to Needles, with the average worker pulling in $20 an hour. East Bay Times wrote that in one year, the town’s 10 percent tax on weed sales brought in over a $1 million for the local coffers, nearly a fifth of its total $5.5 million budget. Most of that cash comes from the cultivation and manufacturing side, but Needles has four medical dispensaries in town, too. (The council is still mulling over a potential recreational retail shop.)

Needles also serves as a rest stop for highway travelers, yet most often pass through without stopping to buy fuel, food, lodging (or pot) these days. The town’s council members suspect California’s gun laws are discouraging travelers — who sometimes drive with or carry firearms on their person while traveling — from spending their money in Needles.

“They don’t want to stop at the border and separate it all. It takes time,” said Councilman Tim Terral, who initiated the proposed pro-gun declaration, to the East Bay Times. “They’re used to carrying their weapons with them at all times.”

Arizona and Nevada, in contrast to California, have some of the loosest firearm rules in the nation. For instance, in Arizona, gun owners can conceal-carry without a permit, which is required in most states, including Nevada. Meanwhile, Nevada’s permits aren’t recognized by California authorities. In fact, California doesn’t reciprocate any concealed carry permits from other states.

Additionally, California’s limits on magazine capacities, or how many bullets or shells a firearm can hold, clashes with Nevada and Arizona’s gun cultures. In Nevada and Arizona, there aren’t any capacity limits, and some popular guns such as certain Glock models are designed to carry more ammo than California’s maximum, which is 10 rounds.

Despite these dusty inroads, the federal government still views any sales or possession of marijuana as a crime. On top of that, the DEA and ATF say that cannabis consumers cannot own or operate firearms since weed is a controlled substance, though, generally, state and local authorities may take more tolerant approaches to weed smokers who own guns, depending on the jurisdiction.

In April, the Democrat-controlled US House introduced a Republican-led bill that would allow medical marijuana patients to own firearms. If the bill passes, it still won’t benefit Needles, since the town is trying to attract out-of-state pot shoppers who also tote steel. Just as California doesn’t reciprocate concealed carry permits from other states, the state doesn’t reciprocate medical marijuana cards from other states, either.

How Do You Know If You Need a New Therapist?

What is “Thai” Weed and Why Do Cultivators Love This Landrace Strain?

Using Cannabis on Your Path to Substance Abuse Recovery

Can Cannabis and DNA Help Curb the Obesity Epidemic?